French and Israeli visions on Artificial Intelligence What is the best strategy to support the development of AI? On September 10th, in the frame of a series of panel discussions dedicated to artificial intelligence (AI) and its ethical issues organized by the French Embassy and the French Institute of Israel, Prof. Maj. Gen. (ret.) Isaac […]

French and Israeli visions on Artificial Intelligence
What is the best strategy to support the development of AI?
On September 10th, in the frame of a series of panel discussions dedicated to artificial intelligence (AI) and its ethical issues organized by the French Embassy and the French Institute of Israel, Prof. Maj. Gen. (ret.) Isaac Ben-Israel and Prof. Cédric Villani introduced and then discussed French and Israeli strategies on AI. 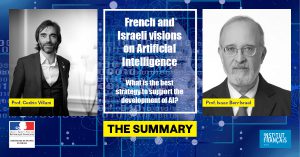 While the French strategy, based on the "AI for Humanity" report, was unveiled in 2018, the Israeli strategy has not yet been made public. This debate was thus an opportunity for Isaac Ben-Israel to describe its outlines and objectives, among which is the will to make Israel one of the five world leaders in artificial intelligence.

In France and Israel, strategies are based on the identification of sectors defined as priorities: health, transport and defense. If the fourth priority differs from one country to another (environment for France, agriculture for Israel), a surprising common point was raised during the discussions: finance, a strategic area and particularly concerned by the issue of artificial intelligence, has not been defined as a priority in either of the two national strategies. This is mainly due to the ability of the financial sector to develop on its own, with its own resources, without the need for any governmental assistance.

One of the main issues identified by Cédric Villani and Ben Israel is information sharing. Both nationally and internationally, data sharing is essential for the proper development and functioning of AI. However, it implies trust between the various players and the overcoming of obstacles that are more often psychological than technological.

Both strategies substantially tackle the issues of ethics and regulation of artificial intelligence. The development of a secured AI is one of Israel's priorities, as evidenced by the name of its strategy "national secured artificial intelligence initiative". However, France and Israel do not the share the same vision when it comes to the role that the state should play in controlling technological innovations. France would like to implement a legal framework providing rules that would be applicable from the design of algorithms. Israel seems in favor of a freer approach and refuses to frame the development of technologies, preferring a system that corrects dysfunctions a posteriori.

While many similarities between French and Israeli strategies were emphasized, the discussion also highlighted a different understanding of issues related to ethics. In opposition to the French and European vision that promotes a responsible digital environment, based on the concept of ethics by design, Israel defends a model that favors innovation above all, based on a better user education rather than on the supervision of machines.

The replay of the discussion is available on the website ai-and-ethics.com.

Women shaping the future of Mathematics and Computer Science research in France and Israel!

Four young female researchers from France and Israel have been awarded the Séphora Berrebi Scholarships for Women in Advanced Mathematics & Computer Science, for its third edition: Vlerë Mehmeti, Sreeja Nair (France), Brit Youngmann and Ori Saporta Katz (Israel) are setting an example for girls who are passionate about science and want to take part in building tomorrow's world.

To learn more about the Séphora Berrebi Scholarships for Women in Advanced Mathematics & Computer Science : HERE